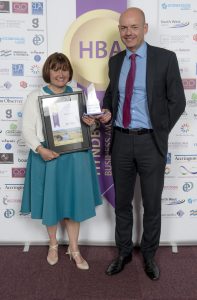 BEING crowned Made In Hyndburn winner was an unexpected honour for family firm Admagnetics. The company, which was founded in Burnley, has been on Huncoat Industrial Estate for 26 years. It was up against serious competition in the Hyndburn Business Awards category with finalists including Simon Jersey.

Admagnetics was founded by Alan Moorhouse, who died 11 years ago. The business is still run by his wife Sallie, managing director, and their daughter Angela Sharples, a director. It manufactures bespoke transformers and standby power equipment and sells all over the UK with 35 per cent of orders exported to Europe and Russia.

Angela said: “We were nominated for the awards and at the time I didn’t know much about them because I don’t follow social media, but the staff did. When I filled the form in I was advised to enter the Made In Hyndburn category.”

The presentation was held at Accrington Town Hall and when the company was named as a finalist Angela offered staff the chance to join them and they soon made up a table of 10, this included sales manager Steve Garner, who travelled from Crawley for the occasion.

She said: “We didn’t realise the finalists would be invited onto the stage, so that was a surprise to begin with. While there we looked at the other finalists and wondered which of them would win it, then they said our name. We were both surprised and delighted. We are a family business and we have an excellent relationship with our staff, a lot of whom have been with the business for many years.”

At the time of the awards, the company was in the process of putting together a new website and so they got the chance to promote their success far and wide.

Angela said: “We are one of the few remaining manufacturers of transformers left in the North West. We have been nominated again this year and we will be applying.”