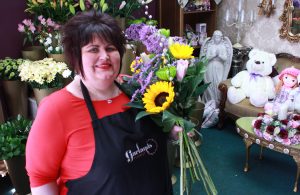 FLORIST Rachel McClure’s arrangements are made from the heart so it is no wonder Garlands caught the eye of the judges of Hyndburn Business Awards. Rachel and her husband Simon bought the business in 2003, but Garlands first opened in Oswaldtwistle in 1991. Rachel said: “I live locally and knew the lady who owned it, I often helped out there and I said if she was ever selling it, I wanted first refusal.”

Simon and Rachel met at Blackburn College in 1988 and trained to be residential social workers, but the recession ended that career choice so Simon continued to work as a professional pianist while Rachel got a job driving for a florist. She said: “My parents nearly bought a florists when I was 12 but it would have meant we would have had to sell our house so they decided against it. After driving for a florists shop in Blackburn, I then went to Myerscough College for three years on a part-time course and took my floristry exams. Our first shop was on Fishergate in Preston in 1993, then we opened a shop in the Accrington Arcade in 1995 before Garlands Florists became available.”

In 2016 customers nominated the business for the inaugural Hyndburn Business Awards, but Rachel never expected to win the Independent Retailer category because of the calibre of the other finalists. “When they announced we had won, I was so excited I was jumping up and down,” she said. “It was quite a shock for us.”

Lots of customers have commented on how well the shop did and Rachel said Garlands’ website has seen a big increase in visitors. She said: “Oswaldtwistle has changed since the shop first opened in the 1990s when there were big factories, people got paid weekly and they would call in on their way home for flowers. Now our a quarter of our businesses is through our website and we have customers from as far away as Australia, Dubai and Canada. The most unusual item we have been asked to make was for another local business Rosettes Direct who wanted artificial laurel wreath collars for horses in the Horse of the Year Show. To be a florist it helps to be arty, have an eye for design, know how to put different textures and colours together and be able to think outside of the box. As a florist you are serving customers at the highest and lowest points in their life from weddings to funerals. My arrangements are from my heart, full of feeling and empathy and people say it shows.”

The company received a loan from Dave Fishwick’s Burnley Savings and Loans, which helped to pay for a new shop front and a van. Her business featured on his Channel 4 programme Bank of Dave and they have become firm friends.