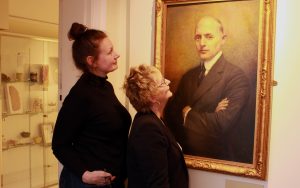 A YEAR after winning the Tourism Business of the Year award, Haworth Art Gallery has expanded its visitor experience. The Stables and Motor House Artists’ Studios officially opened just months after the gallery won the Hyndburn Business Award and the Heritage Lottery funded project is already home to 12 artists with room for a further four. The Gallery Kitchen has also extended its opening hours and now provides catering from 11am with weekend bistro, gala nights and functions.

Gallery manager Yvonne Robins said: “Winning the award gives kudos to what we do. We have used it on all our publicity and literature we send out. The trophy and certificate is on display in the entrance along with our Trip Advisor Certificate of Excellence and Hyndburn Borough Council All for One award. This award helps to promote Haworth Art Gallery as a tourist attraction and over the last 12 months we have really expanded our visitor experience”

A visitor nominated the gallery for a Customer Friendly business award, but Yvonne was advised to also enter the Tourism category. Last June, at the presentation evening at Accrington Town Hall, Yvonne and colleague Margaret Porter joined other finalists on the stage for the Tourism category. She said: “We never expected to win and could not believe it when our name was read out.”

The former home of brother and sister William and Anne Haworth was built in 1909 and was gifted to the Corporation, along with works of art, in 1920. A sum of money for its upkeep was also bequeathed. Since Yvonne became Gallery Manager in 2014, the 8,500 visitors have increased to more than 23,000 a year. Now a full programme of Sunday family workshops has been arranged, family fun days will be held in the grounds, live music is on alternate Sundays along with further workshops led by artists who have a studio in the former stables building.

The free to enter gallery boasts the largest collection of Tiffany glass in Europe along with temporary exhibitions and the artists’ studios. It is now also a popular wedding venue. Yvonne added: “The grounds are also spectacular with the rose garden, a replica War Memorial to the Accrington Pals, memorial trees donated for the Pals by local historian Les Bond and a tree planted for the Queen’s 90th birthday. We have had visitors from South Africa, America and Australia, sometimes because they are staying with local relatives, sometimes they are researching a family tree but more often than not, it is to see our collection of Tiffany Glass.”