When Enterprising People organise a local Business Awards competition, they always try to showcase the skills and talents of everyone in the area. Hyndburn Business Awards was no different. Their aim was that every element of the competition was designed and created in Hyndburn. This included the website (designed and created by Plus Internet of Oswaldtwistle), all of the design and print work (supplied by Ellison Printing of Rishton), and the food at the ceremony (lovingly made by Roots Restaurant at Accrington & Rossendale College).

The most difficult challenge is always the trophies, as there are so few trophy designers around, so the easy solution would be to buy trophies from elsewhere and have them engraved locally. Enterprising People wanted more than that and came up with an innovative way forward – by involving local Secondary schools in a trophy design and make competition. Enterprising People coordinator Rob Carder said, “There is an amazing wealth of talent among the young people at local schools.  The schools also have the resources and support which are second to none to help the students respond to the trophy design challenge.”

Rob Carder said: “We are very grateful to both schools for the time and effort put in by the students and also the staff who have been very supportive. It was amazing to see how the initial plans became prototypes and this made judging difficult. However, when we saw the simple yet elegant design by Isaac Bradshaw and the beautiful rose design by Tamannah Begum, it was clear we had discovered our winning awards.”

Hollins then worked to produce duplicate copies of the winning designs in acrylic for the first ceremony, which took place at the Ballroom of Accrington Town Hall on June 14th 2016. Isaac’s design was used for the 15 individual categories while Tamannah’s was used for the top trophy, the Stonehouse Logic Award.

A shocked Tamannah, 14, said: “I can’t stop smiling. I was just drawing when I came up with the idea of the rose as we have a Lancashire red rose. I do a lot of drawing and I will be picking art as one of my GCSE subjects.” 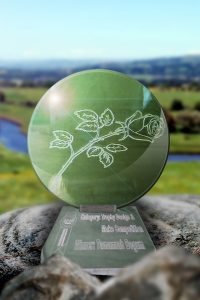 Isaac, 14, will be studying GCSE resistant materials and so found the challenge of making a product to a real brief very useful. Isaac used the ribbon on the award logo and cleverly reversed it on the acrylic base where the logo is etched. He said: “I am hoping to do a job involving woodworking. To create the design, I first looked at what was already out there and then came up with my own ideas.” 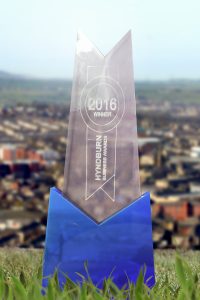 Head of design technology Peter Charles said: “It was good for the students to have a real brief to work to and to hear feedback from the judges so they could modify their original designs. Students worked at break, lunchtime and after school to make their prototypes.” 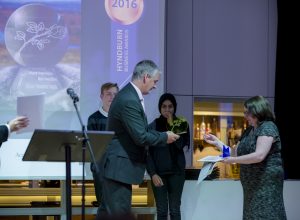 Tamannah and Isaac were invited to the inaugural ceremony, along with their parents and representatives from the school. At the beginning of the ceremony they were introduced to the 250 strong audience by Graham Jones MP, who presented them with a certificate, a gift voucher and an engraved trophy made from their winning designs. 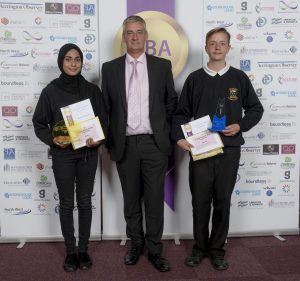